Building the Lab of the Future

Why do we need Automation?

Revo is fully automated. Built to safely store and accurately dispense solids and liquids, it can be integrated into any of your processes to increase productivity and eliminate error-prone manual handling of chemicals. Revo enables users to focus instead on higher impact tasks.

Beyond solution preparation, the LabMinds logistics platform allows users to seamlessly navigate data on individual consumables, batches of solutions, SOPs, system status, and much more. With Revo, you’ll have full confidence not only in the solution but also the entire process around it.

Imagine a world where you could write a script that orders optimal solutions around an initial positive release. You simply input the initial data and the next thing you notice is an email informing you that the 4 solutions you need are waiting for you. Using the associated data from the most accurate solutions, you refine and repeat the process . Three such iterations could be run every single day, or 15 in a week. With no work whatsoever spent on preparing the solutions or even figuring out which solutions would be ideal to try.

Even better, the Revo AI can target a specific pH or conductivity even for solutions that have never been made before. To train the AI to use chemicals it’s not yet familiar with, up to 40 different solutions with distinct chemical ratios and concentrations can be generated and analyzed by built-in sensors over a weekend. Come Monday, the AI now is familiar with the space and is capable of generating any solution you need that’s within its considerable dosing and capacity range.

And that’s how easy a potentially very painful process has become.

In science one of the biggest challenges faced by laboratories is the integration of data from different sources.

Our Revos are connected systems. Introducing LabMinds cloud-connected software and the Revo machine learning capabilities offers further visibility into your connected systems, facilities, and processes. Revo will generate and manage the flow of data from the time a user places a request to its completion, enabling more strategic approach to laboratory management.

Revo does much more than completing simple tasks like calibrating a pH sensor, scale, or conductivity sensor, cleaning glassware, weighing compounds, and adjusting pH. Revo automates the full process and immediately alerts users if any problem is detected to provide an early warning before your solution is lost. By making your lab itself smarter, your scientists are able to shift their focus to discovery and innovation. Thus, ensuring high-quality results based on high quality solutions.

LabMinds Cloud allows full visibility to what was previously “inaccessible” in terms of data and introduces new opportunities by gaining extended insight into experimental performance from the formulations lab to QA/QC.

Part of the IoT and functioning on the AI, Revo drastically enhances any operational optimization and, furthermore generating validated and more robust results based on the full traceability and high quality of the solution.

In today’s world, location should not matter. What difference should it make that one laboratory is in Shanghai, another in Munich, and a third in Boston? Alas, it makes a great deal of difference, or at least it used to. Revo will erase the geographical difference as much as possible, allowing for a seamless transition by running the exact same solutions on the other side of the planet rather than just ones that are hopefully close enough.

We have heard many stories where differences in solutions between sites have caused significant problems. No longer – Revo is even equipped to spot differences in the environment like humidity that might impact results.

The fully-automated Revo system solves this problem by eliminating variability and potential sources of error to improve the accuracy and reproducibility of your solutions.

Calibrations processed on a daily basis ensures uniformity, reliability and integrity of your buffers used in your experiments. 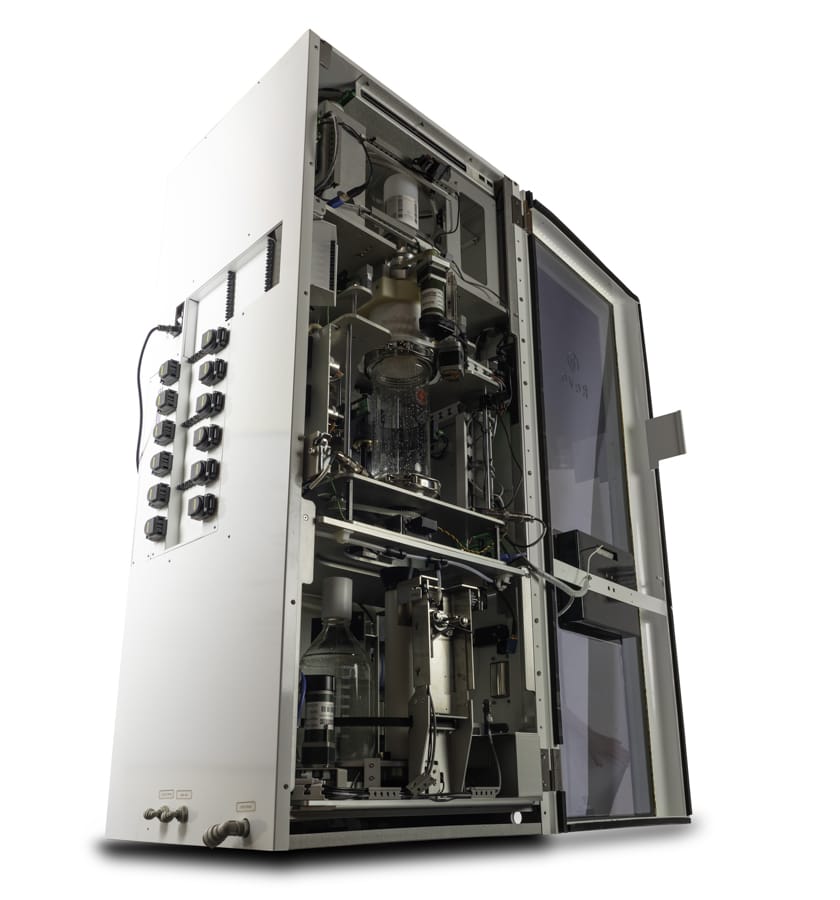 Join the most advanced laboratories in the world who are using Revo to build the lab of the future.